The path to 5G for military use

With ever-improving user mobile devices, network infrastructure must also be improved and developed at a similar rate. Every generation of communication standards has improved data throughput and latency, and 5G is no different. This new standard will pave the way for new applications and increase data throughput of cellular networks tenfold. 5G for the military is expected to – among other uses – improve intelligence, surveillance, and reconnaissance (ISR) systems and processing; enable new methods of command and control (C2); and streamline logistics systems for increased efficiency.

Cellular devices have revolutionized the world, from their invention in 1973 to modern-day smartphones. These handheld computers have changed the way we communicate with one another, and without the underlying network supporting all these devices it would be impossible to connect everyone around the world. In the same way that cellular device technology has been continually under development, so has network infrastructure, namely by the standards organization 3GPP [3rd Generation Partnership Project]. They are responsible for the communication standards we use for cellular networks such as 3G, 4G, and – most recently – 5G.

All these communication standards rely on a physical cellular network. These networks are comprised of user devices, base stations that can use software-defined radios (SDRs) as the relay, and central operator computers linking the end points of each communication. Base stations have a limited range so they can only service a small area – these areas of coverage are the “cells,” and they’re overlapped to ensure total coverage and help keep track of users as they move. Dividing areas into cells relies on three main factors: type of base station, terrain, and population density. Each base station can only handle a certain number of calls, so in areas with larger populations more cells are required. In urban areas, base stations are placed much closer together, compared to rural areas where there are far fewer users per square kilometer. (Figure 1.) 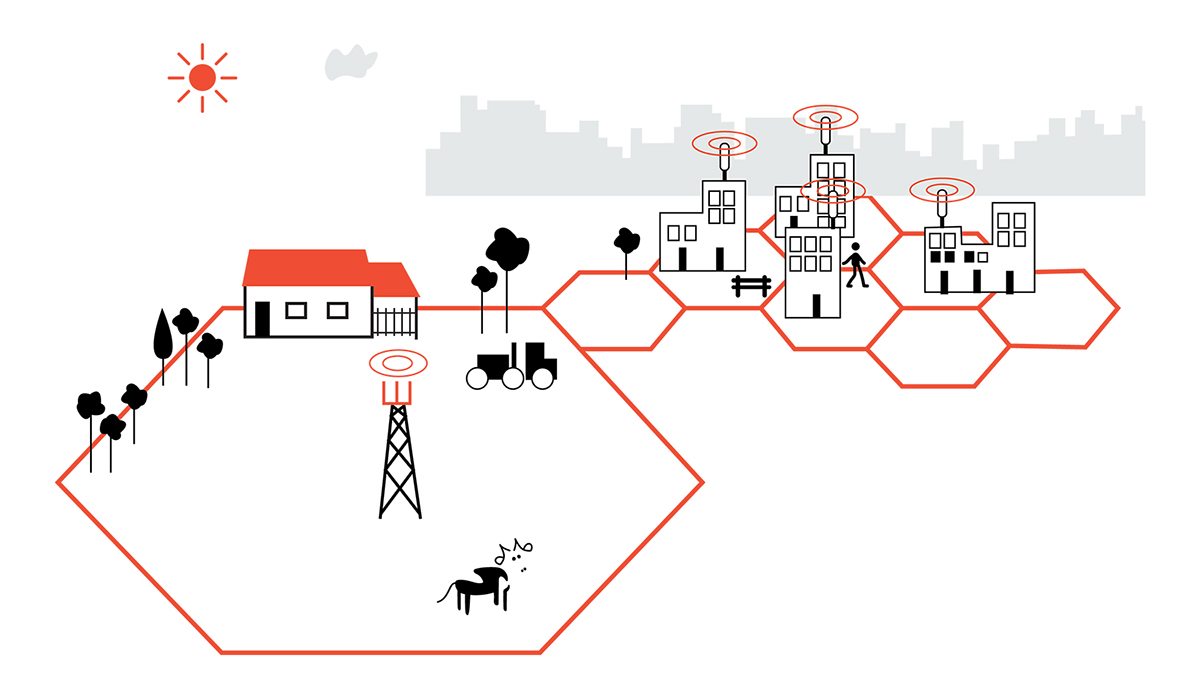 Once a physical network is established, a protocol to exchange information between nodes is required. The 3G, 4G, and 5G generations of cellular network standards are defined by their data speeds and encoding methods also known as air interfaces, or the communication link between two stations in mobile communication. The air interface involves the physical and data link layers of the OSI [open system interconnection] model. (Figure 2.) For example, 4G uses air interfaces WiMAX and LTE. While there usually is a clean break between the technologies implemented each generation, since 5G is still under development it uses 4G to establish an initial connection. Some communications, such as voice calls, do not have a standard on 5G so it defaults to 4G. 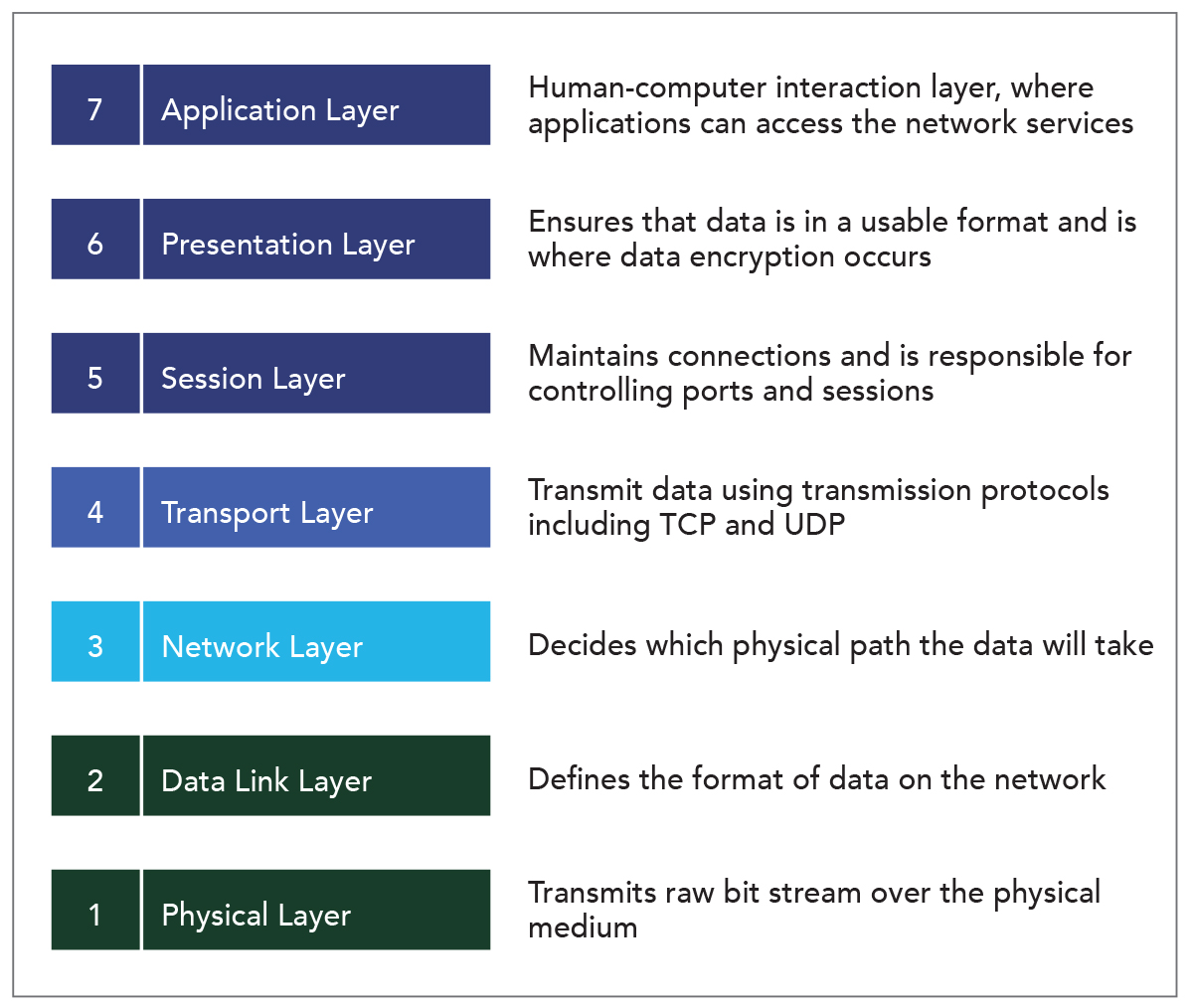 [Figure 2 | The OSI model broken down into its seven layers with sample technologies that fall under each category. Source: Imperva.]

The 5G standard has low, middle, and high bands. The low band operates below 2 GHz, which enables it to have a very long range, well-suited for rural areas. These channels are still being used by 4G and are often cluttered, so the bandwidth of these channels is 5 MHz to 15 MHz, comparable to 4G. The mid band operates between 2 GHz to 10 GHz, covering cellular and Wi-Fi frequencies. Recent developments have pushed the range of the mid band to about a mile with a channel bandwidth of 60 MHz to 100 MHz. The high band operates between 10 GHz to 100 GHz, with a very short range of 800 feet and a channel bandwidth ranging from 100 MHz to 800 MHz. The higher frequencies are less cluttered with other technologies from military, aerospace, and other consumer applications, making room for larger bandwidths and an increase in data transmission speed.

The downside to the higher frequencies is that these millimeter wave technologies drop off much faster with distance and cannot penetrate buildings. These drawbacks mean more frequent, smaller base stations to ensure coverage. SDRs are a practical solution that can be implemented as the base station relays, because SDRs can support ultrawide bandwidth connections over a large frequency spectrum, such as the 100 MHz bandwidth high band 5G connections. SDRs also enable upgrade paths via software updates with future-generation standards.

What are the advantages of 5G?

With each generation of technology, the goal is to increase efficiency, increase data throughput, and decrease latency. 5G is showing huge promise to improve on 4G in every aspect: With increased bandwidth, especially at higher frequencies, it enables significantly faster data transmission speeds. 4G can use as much as seven 20 MHz channels for a total of 140 MHz bandwidth, while a 5G device can stack as many as eight 100 MHz channels for a maximum total of 800 MHz bandwidth. 5G has the potential to peak at 10 to 20 Gbits/sec, a huge improvement over the 100 Mbit/sec speeds of 4G. 5G also has a significant edge in terms of latency: The new generation boasts a theoretical minimum latency of 1 millisecond, a huge improvement over the 20-millisecond latency from the prior generation.

5G has another advantage over 4G – allowing for the massive increase in data transfer – which is that it works in full duplex, meaning that the base stations transmit and receive simultaneously, whereas current implementations must switch between transmit and listening modes. Moreover, while 4G can reach 100,000 serviceable devices within a square kilometer, 5G can reach as many as a million. In terms of the air interface, 5G networks use an orthogonal frequency-division multiplexing (OFDM) encoding similar to 4G LTE, which is designed for lower latency and greater flexibility. This new encoding can increase efficiency by 30% on its own. All these improvements will pave the way for a faster network and potentially new applications for this infrastructure.

The low and mid band of 5G are already in use with other technologies, so most of the concern with this new technology is due to the high band. When people hear “millimeter waves,” the first association is microwaves, so a common urban myth that has emerged is that the more frequent cell towers that are required to support the new standard will expose the general population to harmful radiation. This is simply not true: The 5G base stations will need to emit stronger signals, but due to the higher frequency the signal strength drops off significantly with distance. This results in a user-perceived signal strength similar to past generations. The fear of cellular networks being carcinogenic is not a new phenomenon. Both lab and human studies have been conducted on the subject, and they have shown that the RF waves do not have enough energy to damage DNA directly or to heat body tissue. The health and safety of the users is always prioritized in consumer products, and 5G is no different. The new protocol is as safe as its predecessors.

What does the future hold for 5G?

5G is still not widely supported by networks and phone hardware and needs time for development. 5G infrastructure is starting to be built, but as with any other transition between communication standards, there is a gradual handoff between the old and new standards. This new generation is forecasted to exceed 2.7 billion users worldwide by 2025. If the theoretical speed of 10 Gbits/sec and 1 millisecond latency are achieved, 5G can lead to many exciting applications.

For the military, 5G will lead to sensor fusion, which means real-time merging and analyzing data from devices and tools including surveillance cameras, detection sensors, base stations and gateways, smartphones, radios and communication nodes, and manned and autonomous vehicles. The data captured will enable quick modeling and generation of real-time data for logistics and area control; enhanced intelligence, surveillance, and reconnaissance (ISR) systems and processing; command and control (C2); and active protection of units and bases.

Reza Mohammedi is an engineering student at the University of Toronto; his work at Per Vices focuses on network infrastructure.