Maintaining dominance of the electromagnetic spectrum has never been more critical to mission success. The challenge facing system designers is how to accelerate the transition of new communications and electronic warfare (EW) capabilities from concept to the laboratory and then expedite the deployment of those new capabilities to the warfighter.

A new breakthrough approach for SDR waveform development offers a better way by leveraging proven commercial SDR USRP [Universal Software Radio Peripheral] technology for lab development. Originally developed by Ettus Research, commercial USRPs are tunable hardware transceivers containing FPGA [field-programmable gate array] and processor resources that, when connected to a computer, provide engineers with access to the electromagnetic spectrum with the use of open-source software tools. By leveraging USRP hardware, the resulting waveforms can then be seamlessly deployed on rugged 3U OpenVPX boards aligned to the Sensor Open System Architecture (SOSA) Technical Standard or aligned to C5ISR/Electronic Warfare Modular Open Suite of Standards (CMOSS). Now, they are based on the exact same USRP architecture as the lab system on which they were developed.

There are USRP models that can run headlessly for mobile operation and one model that has an IP-67 rated enclosure for outdoor installation. Customers and partners have also built custom housings for deploying USRPs on vehicles, drones, or manpacks. However, commercial lab-grade USRP SDRs are not natively ideal for deployment in extreme temperatures or high-shock and high-vibration environments. For rugged deployment of wave­forms and algorithms prototyped with USRP SDRs, this reality has necessitated mechanical work on enclosures to take the USRP to the field, or for the IP to be migrated to mission hardware via FPGA export tools or software rewrites. Without a common API shared by both platforms, transitioning waveforms devel­oped on commercial hardware to a mission system requires significant software and firmware work, sometimes taking months, just to modify a custom board support package (BSP) for a specific proprietary SDR or an FPGA board, for example.

Now, using SOSA aligned USRP-compatible commercial off-the-shelf (COTS) VPX hardware, lab development can be reduced from months to weeks. Engineers can go from taking delivery of the commercial USRP to developing an EW jamming technique test in as little as a week, while migrating the waveforms to the OpenVPX board can be done in only minutes.

Even better, the use of a commercial SDR solution for lab development opens up to an extensive open source community, providing system developers with immediate access to a huge IP library of SDR waveforms, including some dedicated defense code libraries. The result is a cost-effective approach for lab-based innovation and prototyping of SDR technology that also provides a seamless and direct path to migrate IP from prototyping hardware to deployment on a rugged modular open systems architecture-based mission-ready platform. Using the open source community, a waveform developer can access software code from multiple sources, and immediately try it out and then iterate it to the point where it performs the way they want. Compare this to the development process faced by an engineer at a traditional Tier 1 military vendor: First, they have to write a requirements specification, then they must get the spec approved, and then they have to get a contract signed before development commences.

Lowering the cost of SDR development and enabling engineers to leverage existing open source IP delivers a great boost to creativity and enables new techniques to be proved out more quickly. Because commercial USRPs – which can be run from a laptop – are significantly less expensive than mission system hardware, lab development now becomes scalable. and the lab USRP can be made available to a greater number of engineers on a development team. Instead of having to share time to gain access to a limited number of more costly mission systems, each engineer can now reasonably afford their own SDR.

Speeding the delivery of new techniques is essential in the cat-and-mouse world of EW as adversaries develop more novel, creative communications methods and threats, such as adopting low-cost commercial drones for weapons systems. What’s more, these new threats are being developed at the speed of commercial tools as opposed to the far slower speed of a defense program. Providing SDR system developers with access to open source IP is a true game-changer when it comes to addressing these new threats.

Instead of being limited to IP support developed for a very specific defense market, SDR engineers can now leverage open source USRP IP, expertise, and SDR maturity that scales across academic, commercial wireless, radio astronomy, and other domains. The huge available open source user base, combined with large amounts of IP, can, for example, give Army engineers who may not have been trained in radio access to a far greater knowledge base for collaboration.

An example of a USRP for lab development is the Ettus Research USRP-E320 (Figure 1), a standard for developing wireless applications for commercial, academic, scientific, and defense applications. Supported by a large open source community of professionals and hobbyists, Ettus Research USRPs were first developed to provide a prototyping platform for research into wireless applications, such as 4G/5G telecommunications. Based on the 2x2 MIMO AD9361 transceiver from Analog Devices, the USRP-E320 covers frequencies from 70 MHz to 6 GHz and provides as much as 56 MHz of instantaneous bandwidth. 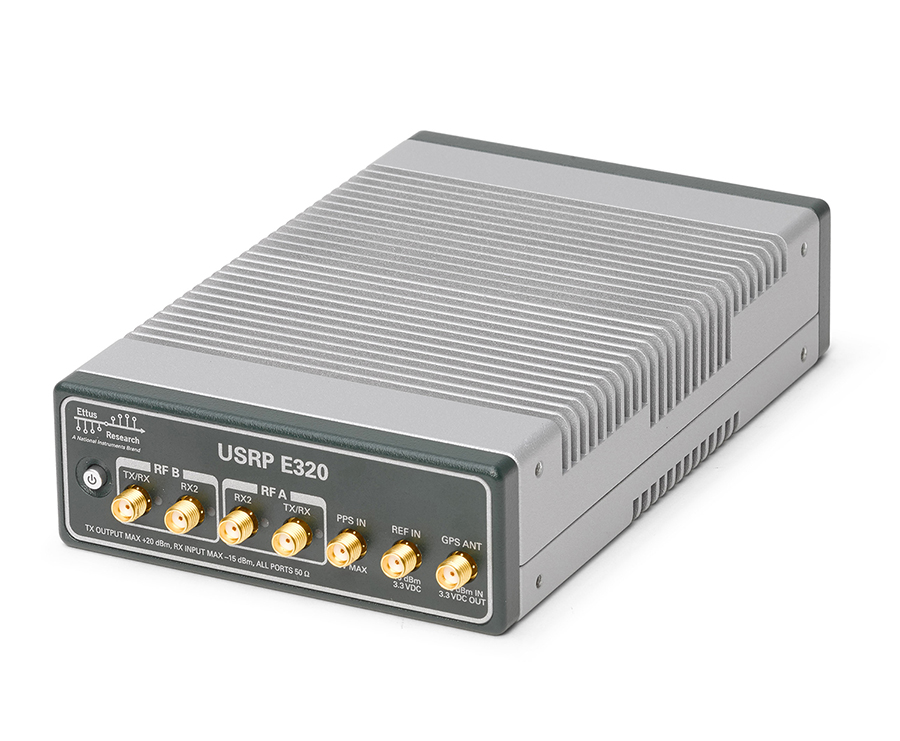 Developed under agreement with NI, Curtiss-Wright’s VPX3-E320 SDR module is a fully rugged 3U OpenVPX functional equivalent variant of the USRP-E320 with backplane I/O designed for alignment with the latest RF system implementation standards, including CMOSS and Modular Open RF Architecture (MORA).

Both the USRP-E320 and the VPX3-E320 are fully compatible with the USRP hardware driver (UHD) and the open and flexible FPGA framework, RF network-on-chip (RFNoC). (Figure 2.) These two software frameworks enable engineers to rapidly prototype on commercial hardware and can be the path to a SOSA aligned deployed solution – bridging the gap from prototype to rugged embedded deployments. Building on the common UHD and RFNoC framework means that engineers can leverage the vast training, IP, and open source community to rapidly build and deploy new capabilities faster. 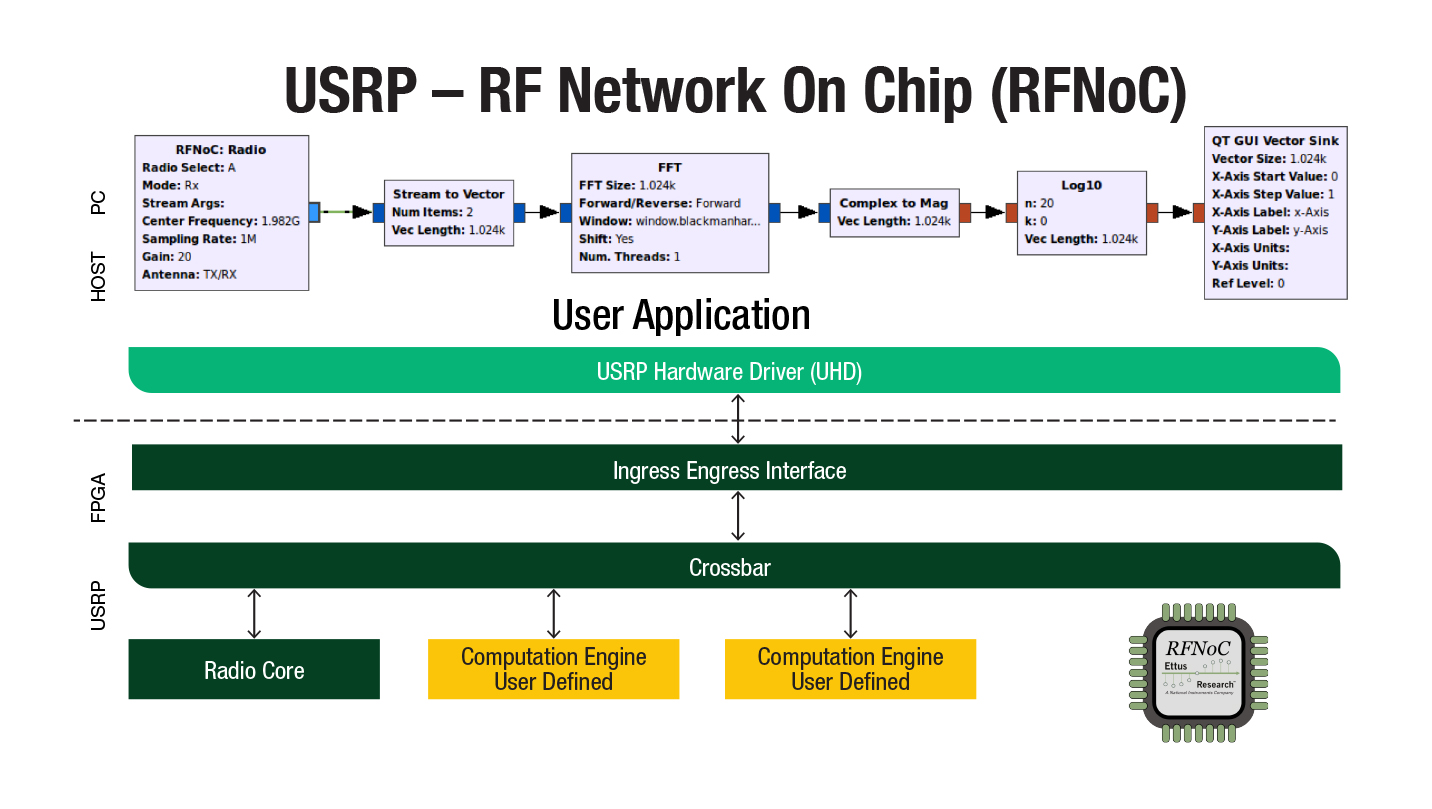 [Figure 2 | RFNoC is a network-distributed heterogeneous processing tool with a focus on enabling FPGA processing in USRP devices.]

Because the USRP-E320 and VPX3-E320 support UHD and RFNoC, a lot of the FPGA programming tasks are automatically abstracted, making programming easier, and in some cases even eliminating the need for an FPGA code-development engineer. Also, some narrowband applications can be handled by the onboard CPU without requiring any FPGA development.

Consider the case of an engineer tasked with designing an SDR-based drone defense application: In the past, to do their development, the engineer would need to take SDR mission hardware out of commission, or instead design some custom development boards (or build up the infrastructure for data movement using some COTS boards). Rather than having to go through that long and costly process – which includes the chores of designing the IP and then migrating it over to a mission system – the engineer can now simply design the application, run it in the lab, then assess the new capability using the USRP E320. After that, with very minimal changes, they can migrate the new IP over to the deployable VPX3-E320 version.

Open source SDR technology provides the warfighter with new tools for deploying novel EW techniques to the battlefield and a new path to dominance of the electromagnetic spectrum.

Chad Augustine serves as a Product Manager for Curtiss-Wright Defense Solutions, where he is responsible for the Rugged SDR Product Line. Chad has more than 20 years of experience in the COTS community.

Haydn Nelson is a U.S. Navy veteran with more than 17 years of experience in wireless and DSP technology applications. He has worked in several industries – from military and aerospace research to RF semiconductor test – and has broad experience in radar/EW and communications systems. Haydn currently serves as a business leader at NI for their wireless prototyping and deployment applications in military and aerospace markets.