CEO and co-founder of ModalAI

Conducting reconnaissance in inhospitable environments is nothing new for the U.S. military. Yet as foreign threats on the ground become both more sophisticated and more remote, the challenge of gathering intelligence in dangerous, hard-to-reach locations requires an approach that maximizes critical data collection while minimizing risk to live personnel.

The use of unmanned aerial systems (UASs) or drones to perform intelligence, surveillance, and reconnaissance (ISR) work in hazardous situations requires them to be lightweight, compliant with regulations, and maneuver reliably in dynamic GPS and GPS-denied environments.

No GPS, no problem

GPS has become the standard navigation feature for cars, cellphones and devices including UASs. Autonomous UASs use GPS to determine their latitude and longitude, along with a barometer (for altitude) and compass (for magnetic heading) to get an accurate orientation and position of where they are located in space. They also use this data to determine the location of other objects such as mission waypoints, geofences, and the home position.

The strength of the GPS signal determines the accuracy of a drone’s navigation. GPS works best with an unobstructed view of the sky, but as the number of use cases grows, so do the different types of environments UASs must navigate in.

Navigating indoors or in close proximity to buildings can be very challenging for UASs because the buildings block and reflect GPS satellites from communicating with the receiver. Even slightly degraded satellite strength can cause position accuracy to decrease rapidly. Degradation or loss of the GPS signal will decrease the accuracy of location data and possibly force the vehicle to terminate its navigation until a human intervenes or it crashes.

Without a GPS signal, a UAS cannot orient itself in space and, therefore, cannot operate on its own. Because drones often must navigate in dynamic GPS to GPS-denied environments, they need a reliable backup navigation tool when GPS is not available. With visual inertial odometry (VIO), a UAS can operate autonomously without GPS. VIO uses visual and inertial data to measure distance traveled and position without the need to have a GPS signal. What makes VIO unique is that it can measure the aircraft’s position in 3D space and is the foundation of many other computer-vision functions such as obstacle avoidance, position control, and autonomous navigation in a GPS-denied environment. (Figure 1.)

[Figure 1 | Pilot view of an autonomous sUAS livestream as it maps and navigates in a GPS-denied environment with VIO. ModalAI image.]

UASs that use both GPS and VIO can navigate precisely through dynamic environments and complete mission-critical tasks, including:

Because weight is gravity’s nemesis, a UAS has to be as lightweight as possible, especially if it’s used in confined spaces. One way to optimize weight and flight is to use an autopilot with multiple integrated components on its main printed circuit board (PCB).

PCBs are now smaller and smarter than ever. Traditionally, UAS developers would need to use six or seven different boards to achieve autonomy, AI, and flight. However, with new technology and innovation, some autopilots on the market now condense all that computing power into one single-board solution. This single-package solution enables a smaller, lighter aerial vehicle, ideal for navigating in hazardous situations. A single PCB can also reduce cabling and cost while increasing reliability since there are fewer components.

Also, consider the ease of development when working with an integrated PCB; with software already on board, they are plug-and-play right out of the box. PCBs built on open-source platforms come with reliable software development kits (SDKs) that enable flexible and efficient designs and builds plus feature ports for optional add-ons.

The U.S. Department of Defense (DoD) Defense Innovation Unit (DIU) spearheaded what it calls the “Blue UAS Project,” which developed trusted sUASs for the DoD and federal government partners. This effort built on the U.S. Army’s sUAS program of record, Short Range Reconnaissance (SRR), to promulgate inexpensive, rucksack-portable, vertical takeoff and landing sUAS. Blue sUAS systems share the capabilities of the SRR air vehicles, according to information from the DIU, but integrate a vendor-provided ground control system.

The Blue UAS Framework program meets the DoD’s requirements to deliver sUAS components that achieve greater levels of fielded autonomy within DoD sUAS programs; a commonality among sUAS components, which reduces development time and costs; and the ability to stay ahead of the DoD’s latest requirements by testing future-forward technologies on trusted platforms.

One such example of an integrated, plug-and-play solution is VOXL Flight from ModalAI. It fuses a companion computer with a PX4 flight controller on one PCB that enables GPS-denied flight. Its autopilots seamlessly switch from GPS to VIO, ensuring precise flight even in dynamic environments. ModalAI has worked with the DIU since 2018. (Figure 2.) 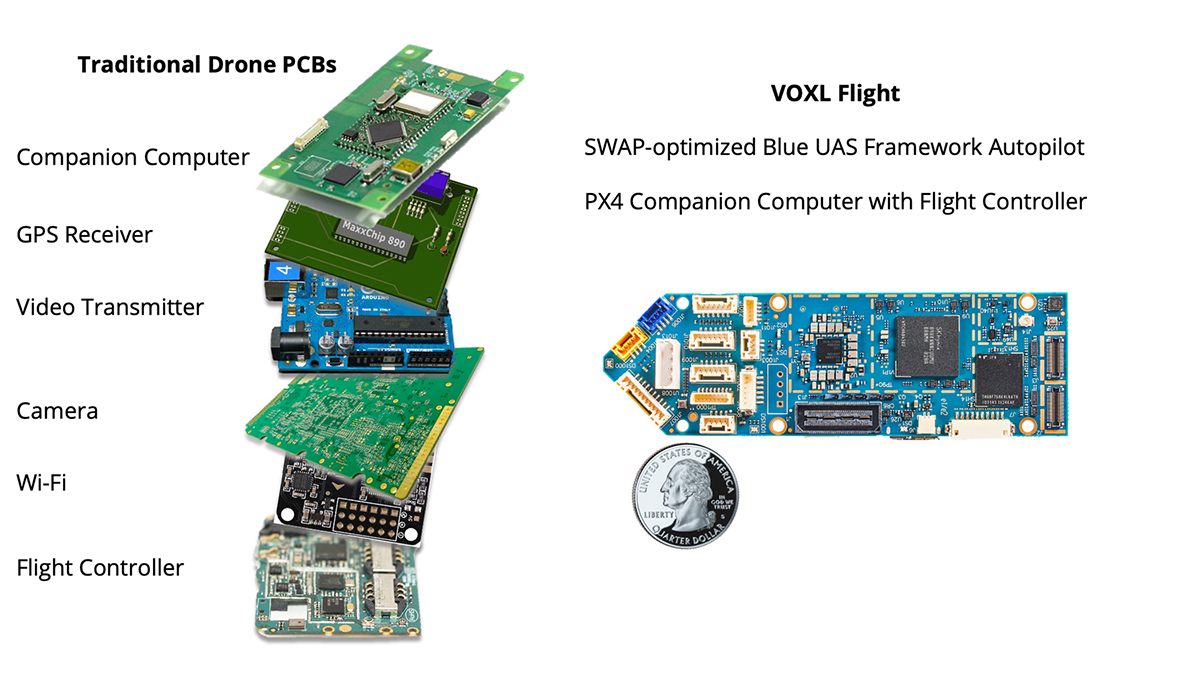 When an sUAS is navigating in a GPS-denied environment like a tunnel, it can also lose connection with its radio link, which can cut off real-time communication to its pilot. In these communications-denied (comms-denied) scenarios, the vehicle must be able to complete its mission and analyze data independently of the pilot. This is where onboard computer vision and AI take over.

AI-enabled UASs further benefit from intelligent self-navigation and object avoidance/detection, essential in comms and GPS-denied environments. The ability to process data onboard in real time enables the drone to make decisions independent of its pilot.

An example: An sUAS is sent on a reconnaissance mission to scout for enemy personnel in a tunnel and loses radio link connection. In that case, it can still rely on VIO to navigate and onboard AI to map and explore the territory. Computer vision, machine learning, and depth/image sensors enable the UAS to autonomously scan and identify objects or people that could pose a threat. Once a threat is detected, the vehicle is programmed to return to the pilot, where it can relay its findings.

Such autonomy enables a wide variety of use cases for military and enterprise applications, including structural and underground inspections, terrain scanning, security monitoring, detecting danger in hostile environments, and more.

Flying a UAS in hostile or dense indoor environments requires precise flying solutions to navigate between GPS-enabled and GPS-denied environments. GPS-denied autonomous craft can also operate outside traditional enemy strategies of jamming or manipulating GPS signals. Equipping the craft with GPS and VIO navigational tools combined with intelligent AI and computer-vision solutions in GPS-denied and comms-denied environments expands the horizons for these sUASs.

EXCLUSIVE WEB CONTENT: For a deeper understanding of what VIO is and how it works, watch this ModalAI-created video:  https://youtu.be/EbzfjNpLzvg