As the threat of weaponized drone swarms continues to escalate for U.S. forces, defense planners are considering high-energy laser and high-power microwave countermeasures to combat the threat of these groups of unmanned aerial systems (UASs).

Drone swarms pose a real and evolving threat to U.S. warfighters and assets, so the quest for a silver-bullet solution to autonomously mitigate these weapons is definitely on.

The U.S. military is seeking a one-size-fits-all approach to counter drone swarms. And while directed-energy technologies aren’t new at all, they’re finally emerging as the countermeasures most likely to be embraced for this purpose.

“Small drones are an asymmetric threat to troops on the ground because an adversary can spend a few hundred dollars on a drone to take out expensive equipment worth much more,” says Michael Blades, vice president of Aerospace and Security for Frost & Sullivan (San Antonio, Texas). “So counterdrone technologies are increasingly on the move, packable, and becoming more automated.”

Commercial counter-UAS systems tend to be focused on RF [radio frequency], “because they’re worried about small drones with controllers using RF and Wi-Fi,” Blades notes. “On the military side, they’re going with directed-energy technologies such as high-powered microwaves and high-energy lasers – because they view them as the way to counter drone swarms of all sizes. A high-power microwave’s electromagnetic pulse can disable all of the drones within a swarm.”

Drone swarms of the future will become increasingly sophisticated, Blades posits. “If you have 50 or 100 drones coming at you it’s a vastly different situation than simply one or two drones,” he says. “There’s an issue of speed and the distance at which you detect drone swarms. This distance needs to be pushed out, because some drones are extremely fast. If you can’t detect, identify, and mitigate swarms quickly, you’re in trouble.”

One big challenge now is that the detection range needs to be sufficient to mitigate an attack before it becomes a true threat. “This is where AI comes in – they’re trying to do a lot autonomously so you won’t even need a person sitting there thinking about it,” Blades points out.

An emerging trend Blades sees within the counterdrone realm is a shift toward ­supporting artificial intelligence (AI). “The ability to process at the network’s edge or in the cloud is going to be huge,” he says. “There will also need to be faster processing to support AI and turn data into actionable intelligence quickly. And open architecture is being championed to future-proof systems to enable sensor fusion. If you have one sensor and bring in another sensor later, you’ll want the ability to fuse them together to get the big picture.”

Anything that helps improve size, weight, power, and cost (SWaP-C) continues to be important as well, Blades adds.

The U.S. Department of Defense (DoD) classifies drones within five categories: Group 1 includes commercial quadcopters that can be purchased online and modified to carry munitions or do reconnaissance and targeting. Group 2 includes fixed-wing systems that look like tiny airplanes, which are fast and maneuverable. Those in Group 3 look similar to cruise missiles, while Groups 4 and 5 are akin to unmanned aircraft.

Raytheon has developed both high-power microwave (Figure 1) and high-energy laser counterdrone solutions to deal with small drone (sUAS) threats, which fall into Groups 1 and 2. “Ironically, the smallest pose the biggest threats because they’re easily accessible and quite advanced now,” says Evan Hunt, director of business development for Raytheon (McKinney, Texas) counter-UAS (C-UAS) and high-energy lasers. “Every new model released is faster, more capable in weather, with longer range, and improved connectivity and flight time. So the trick is really to develop an answer to a threat that can withstand the evolutionary rate.”

[Figure 1 | Raytheon’s Phaser high-power microwave system uses directed energy to down drones – single drones or swarms – by focusing a wide, arcing energy beam on drones. The beam sends out a short, high power burst of electromagnetic energy, destroying the drones’ electronics and dropping them simultaneously from the sky.]

While many drones today can be stopped or deterred via jamming their Wi-Fi and GPS signals, “drones of the future will be unjammable,” Hunt says. “Jamming is only a temporary solution to the drone threat. Drones will not only become harder to jam, they will get faster, deadlier, and more autonomous, and they’ll attack in swarms.”

This makes it an air threat that requires optimized solutions not only to engage and defeat threats in a timely manner but also in a cost-effective way. “The cost-per-shot is minimal with lasers – it’s basically the cost of electricity,” Hunt says. “We need answers to the threat that provide a deep magazine to engage multiple targets within a short time.”

One way to deal with drone swarms is via high-power microwave technology that uses essentially the same technology as household microwaves – but this antidrone microwave is millions of times more powerful. It’s well suited for swarms because it can take out all drones within a large swath.

Significant investments are currently being made in high-powered microwave technologies. “One of the most interesting counterdrone investments we saw during 2020 was in Epirus Inc. (Los Angeles, California and McLean, Virginia), which makes software-defined high-power microwave systems,” Blades says. (Figure 2.) 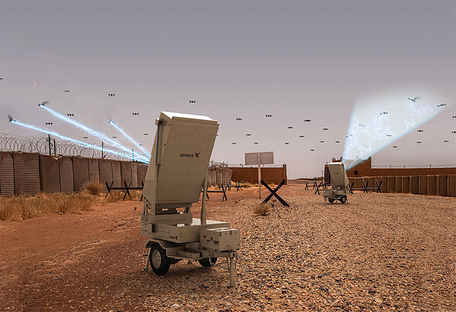 The Epirus solid-state direct energy microwave doesn’t use vacuum tubes or require a truckload of coolant to operate, according to the Epirus website. Company engineers leveraged gallium nitride (GaN) for the Epirus microwave system because of its ability to operate at high voltages with low temperatures, its high power density, and its reduction of size, weight, and power (SWaP).

Epirus received a $70 million Series B investment from a group led by Bedrock Capital and investors including L3Harris Technologies, Piedmont Capital Investments, 8VC, Fathom VC, and Greenspring Associates. The company plans to roll out its Leonidas C-UAS system to market in 2021 and is working on other solutions.

High-energy lasers are an extremely precise way to deal with drone threats for a wide range of scenarios. “It’s an exciting time for high-energy lasers because we’ve reached a watershed moment where they’re finally transitioning to multiple programs of record,” Hunt says.

Raytheon is supporting rapid prototyping programs and, because the DoD is trying to do things faster, “it’s driving an effort where we build systems and send them into warfighter hands to be used operationally,” he adds.

The company has built three 10-kW class systems, which are essentially laser dune buggies. “Two are already overseas, and a third will be sent soon. Between the two out there now, they have 4,000 operational hours,” Hunt says. “The laser has the capability to fire an invisible, silent beam of light to not just stop a drone but to shoot it down or deliver what we call a ‘hard kill’ in defense.” (Figure 3.) 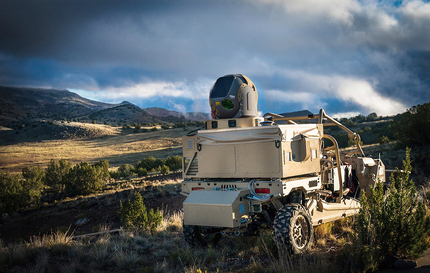 Fiber lasers serve as building blocks for Raytheon’s high-energy weapon system and, since the commercial fiber laser market is advancing at a rapid rate, every time a new version of a fiber laser amplifier comes out it results in a better and more efficient laser weapon.

“We’re constantly amazed by the rate at which our subsystem technologies are evolving,” Hunt says. “Lithium-ion batteries, and batteries in general, have evolved at such a rapid rate that we can store the energy for the laser as deeply as we need and it allows us to easily recharge with just a standard generator.”

AI and machine learning will play a big role in automation and will help laser weapon systems become more efficient. So far, high-energy lasers aren’t fully automated: There’s a single operator within the loop with a gaming-style controller and screen, which enables them to use a camera that’s a combination of hybrid sensor and beam director.

“It’s a large-aperture camera, so an operator can zoom in on a target, monitor and positively identify it, and then press a button to fire the laser if they want to take action,” Hunt explains. “And they can actually see the drone pieces and parts fall off the drone until it departs flight. Positive ID is built into the system, it provides real-time battle damage assessment, and you don’t miss in a normal form that a weapon system can miss. This is a new way of engaging threats.”

How far out can a laser weapon system take down a drone? “A missile for air defense – even for counterdrone use – will likely always have a role to play because of its extended range,” Hunt says. “We make a Coyote UAS, which is a bit of a hybrid drone and missile combo, to fly out beyond 10 km [6.2 miles] to shoot down even small drones.”

The laser weapon starts to identify and engage within a few kilometers, maybe out to 5 km [3.1 miles]. “In Army air defense, this is short or very short range,” he continues. “But it’s important because there will be scenarios in which you have a clear forward line of operation and you know that anything flying out there popping up on a radar shouldn’t be there, so you can launch Coyotes to go destroy it.”

In more asymmetric environments operating near residential areas or with highways near a base, the small-drone threat can pop up from a building or highway within your threat range or one you can’t fire a missile into. “You’re not going to fire a missile at a drone passing through a civilian area,” Hunt says. “Yet, you may need to protect your assets, so you need to find a way to defeat that threat.”

These environments are where lasers really shine. “It’s still a weapon, but as far as weapons go, it’s incredibly precise and nondisruptive. Lasers give you pinpoint accuracy to deliver that hard defeat,” he notes.

One of the biggest challenges for high-energy lasers has been getting into production, Hunt admits. “We’ve done the hard parts – we’ve proven the technology is viable by shooting down a hundred drones within different environments, we’ve trained operators from multiple services how to use it within just a day or two, and we’ve integrated with these larger air defense systems.”

While it’s inexpensive to fire a laser, Hunt notes there’s still an upfront cost to procuring a laser weapon. “We need to continue to drive the price down and the maturity up, and lead times down by moving into production orders,” he adds.

How do high-energy lasers compare to high-power microwaves, and which one would you want to throw at a drone swarm?

“It depends – both technologies are capable of countering a drone swarm,” says Hunt.

High-power microwaves can take out a bunch of targets at once. “But if your high-energy laser weapon has sufficient power and is sufficiently automated, you can kill one target at a time every few seconds – and you’re going to be a great swarm killer.”

High-energy lasers and high-power microwave technologies both have advantages, but the laser weapon is ahead in terms of being used operationally. “Ultimately, both directed-energy solutions are preferred in many use cases,” Hunt says. “For some, high-power microwave might be more advantageous, especially if you’re in a forward operating base and can fire in any direction. But again, if you need to engage things precisely and can’t afford collateral impact, then you want a laser.”

Hunt wants to dispel the myth that lasers aren’t an efficient swarm killer. “It just depends on the power and capability of your laser and the operational environment you’re in,” he says. “For a swarm, you need a big magazine, so that’s why directed energy is so compelling. You just can’t afford to be overwhelmed by the threat, so you need the ability to fire and recharge.”

Avionics market for military to grow by nearly 5% to 2030, analysis predicts