Chassis Monitoring Board keeps an eye on the system

What good is it to be on a ship if the entire ship is sinking, figuratively speaking? 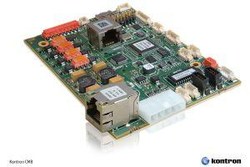 What good is it to be on a ship if the entire ship is sinking, figuratively speaking? The same idea applies to VME and VPX systems managed and monitored exclusively by system-implemented firmware and chipsets: Odds are such a system management scheme won’t continue working if the system itself crashes. Enter Kontron’s Chassis Monitoring Board (CMB), providing management and monitoring of parameters including power supply, airflow, and temperature of installed boards. Deployed in a satellite navigation system program utilizing a VME chassis, CMB has interfaces including GPIOs and I2C and offers high MTBF through compliance with MIL-HDBK217F-2. It is additionally suited to demanding air rotary wing applications (20,485 h at +55 °C) and ground benign conditions (603,005 h at +25 °C).

Its power requirements are less than 1 W (yes, you read that right), and it can control and monitor as many as eight temperature sensors, eight power modules, and eight fans at once. It also renders out-of-band management and monitoring for as many as eight VPX or VME boards. This enables power efficiency, as a system can be allowed – via CMB’s variable computing capacity – to change to maximum computing capacity if the system is in activity mode. Conversely, minimal power consumption can be activated when the system works in surveillance mode. And, a compromised or malfunctioning interface can be inactivated with CMB. The CMB also gathers, then forwards installed-board information including boot stage, health status, and inventory information. CMB has an integrated microcontroller to execute “a multithreaded monitoring application on the Freescale MQX real-time OS,” the company reports. Boot time is faster than 1 second when a multithread approach is taken with the monitoring software.