LONDON. The global rugged equipment market -- defined as devices that are used in harsh conditions and extreme climates that are designed based on certain military standards that determine their resistance to dust, water, and vibration -- will total nearly $44 billion by 2022, according to a market study by Technavio, "Global Rugged Equipment Market 2018-2022."

According to the market forecast, increased expenditure on nations' militaries is one of the major factors driving the growth of the rugged equipment market. In this vein, the report says that the United States accounted for the highest military expenditure on rugged equipment prior to the period studied, increasing its military spending by 22 percent in 2016, followed by China and Russia.

The market outlook also noted a competitive environment in the rugged equipment field due to the presence of few vendors; the report names as major players in the market Curtiss-Wright Defense Solutions, Extreme Engineering Solutions, Harris, Leonardo DRS, Sparton Rugged Electronics, and WinMate.

For additional information on the report, visit the Technavio website. 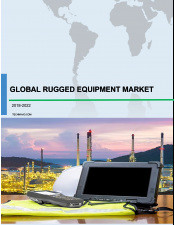