By Richard Pollard
An industry perspective from Curtiss-Wright Defense Solutions

Until we’ve mastered the science of brainwave communications, vision and touch will remain the fundamental ways that users interface with avionics and vetronics systems. Today’s modern warfighters have grown up with smartphones and tablets with intuitive, multitouch projected capacitive (PCAP) touch screens. They rely heavily on these devices in their personal lives and they expect to have access to the same capabilities and conveniences in the field.

To date, the industry has relied primarily on ruggedized resistive touch screens, because resistive screens can be used while wearing gloves and don’t create interference issues. The limitations of early PCAP touch screens made them virtually unusable on defense and aerospace platforms. However, those issues have since been overcome. This progress means that rugged military displays can now provide users with the same familiar interface that they use with their smartphones and tablet devices.

In contrast, a PCAP touch screen is composed of solidly bonded optical screen layers. As a result, there is no air gap or microbeads that must be depressed. Instead, the screen detects and reacts to the static electrical charge of the object that touches it.

Because they don’t include an air gap between screen layers or plastic microbeads, PCAP touch screens don’t suffer from the reflection and image clarity issues that resistive touch screens experience. They provide a crisper, higher-quality image and higher contrast levels that make it easier for the user to see and absorb screen content at a glance.

With PCAP touch screens, the user doesn’t need to worry about consistently applying the right level of pressure to the screen. Instead, they can simply slide their fingers across the screen using the same intuitive, multitouch gestures they are already familiar with to drag screen objects, zoom in and out of images, and swipe in all directions.

In the past, PCAP touch screens required users to interact with the screen with their bare hands. This requirement has obvious limitations for warfighters who are often exposed to extremely harsh environmental conditions and potentially dangerous equipment where gloves are mandatory for personal protection. While capacitive gloves are available, they are not known for their warmth or protective properties. Today, users can successfully interact with PCAP touch screens, even while wearing heavy winter or safety gloves.

EMI and RFI issues were formerly some of the biggest obstacles to using PCAP touch screens in defense and aerospace applications. Because PCAP touch screens use electronically driven liquid crystal displays (LCD), processors, backlighting, and power supplies, they generate electrical noise. However, with advanced signal filtering and specialized grounding, some PCAP touch screens now comply with MIL-STD-461F (for radiated emissions and electromagnetic compatibility) and MIL-STE-1275E (for electrostatic discharge) standards.

PCAP touch screens can be confidently deployed on platforms exposed to extreme temperatures, high vibration levels, and severe weather conditions. Those that comply with MIL-STD-810G (for environmental engineering design and testing) provide an IP65 level of ingress protection from dirt, moisture, and other contaminants. 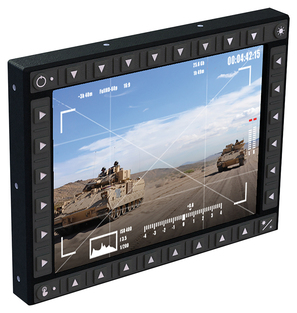 Richard Pollard serves as a Senior Product Manager for Curtiss-Wright Defense Solutions. He is responsible for the Rugged Display and Video Management product line, targeting size, weight, and power (SWaP)-constrained military and aerospace applications. He has 14 years’ experience in the defence industry, serving 10 years in the royal air force as an avionics engineer, including multiple active tours. He then joined Curtiss-Wright and has worked in customer support and systems engineering roles.

Drone flight management market to grow by $15 billion by 2026: report