The C4ISR/Electronic Warfare Modular Open Suite of Standards (CMOSS) enables engineers and developers of systems used by the warfighter to move toward much faster technology insertions and refreshes, with a corresponding reduction in long-term life cycle costs.

The C4ISR/Electronic Warfare Modular Open Suite of Standards (CMOSS) is a modular open systems architecture (MOSA) intended to converge select Army warfighting capabilities – such as mission command, movement and maneuver, and fires – into one system vs. integrating a multitude of separate capability “boxes” into vehicles.

CMOSS is one of the Department of Defense’s (DoD’s) “successes in its early MOSA push,” says Nick Borton, machine intelligence hardware architect for SRC Inc. (Syracuse, New York). “It set the stage for how a standard architecture can shape the market, and reduce costs and integration times. Even though CMOSS was started by the Army, other branches of the armed forces are leveraging it to develop new systems.”

The main benefit of open standards for the warfighter is that they enable much faster technology insertions and refreshes. “Getting needed technology and capabilities into the hands of the warfighter in a timely manner is where CMOSS hits the mark well,” Borton says.

Other benefits are “maintainability, serviceability, supply chain logistics, and all of the other things that come with more modularity,” says David Jedynak, general manager for Curtiss-Wright Defense Solutions’ Parvus Business Unit (Austin, Texas). “You get cost benefits when you’re lumping together what were previously separate systems – because you don’t need a separate chassis and power supply for each one of them once they’re all in one box. You also start to get cost savings in size, weight, and power as well.”

Another reason the government is pushing so hard on open architecture adoption is to reduce vendor lock, which gives the DoD more flexibility in upgrading and fielding new technology.

“[CMOSS] avoids lock-in and provides a better performing product an opportunity to get selected instead of being eliminated from consideration because it doesn’t meet all the proprietary locked-in interfaces,” Jedynak points out. “The problem of surrounding a technology with nonstandard interfaces, so no one else can get in with their solution without an NDA and access to the interface/software, all goes away.”

This type of situation is good, he continues, because it enables companies to focus on their core intellectual property instead of constantly reinventing the wheel.

“Today’s systems are continuously challenged with product life cycle management (PLM) issues as they age,” says Mark Hutnan, vice president of business development for Abaco Systems (Huntsville, Alabama). “Many systems require parts that are at their end of life and unavailable – requiring additional costs to find parts on the secondary market, or paying for production lines to reconfigure and restart to build old components. SOSA/CMOSS alignment enables rapid tech insertion and upgrades since older and newer generations of components should be compatible, and greatly reduces long-term life cycle costs.”

Costs to replace obsolete components, whether hardware or software, will decrease “By establishing a market around the mechanical interfaces of the plug-in cards, and on the wire interfaces of the software capabilities, already-developed products that meet most of the needs will already be around,” Borton notes. “Up-front development costs won’t be present to the same degree within a CMOSS ecosystem. Integration time and some enhancements may be needed, but much of the development cycle should be short-­circuited from a system maintainer’s perspective.” (Figure 1.) 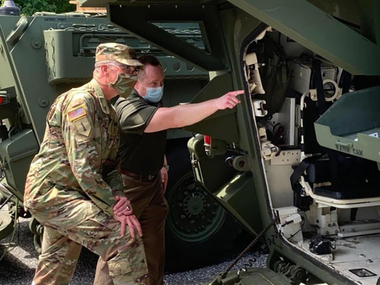 Like many other open architecture initiatives CMOSS came to be because the end user wanted more commonality. “In the beginning, at various Army-related conferences, we saw high-level leadership express the desire to see a board- and backplane-modularized way of converging radios and processing and sensors rather than a bunch of standalone boxes,” says Jedynak.

After a few years, it became clear no one was connecting the dots to a pathway forward. “So in 2013, we started pulling people aside to talk to them about the OpenVPX standard for embedded computing systems as a rugged backplane approach they could leverage to achieve their goals,” Jedynak continues. “This was early on, and it turned into the Army’s hardware/software convergence approach.”

Development on the Army side was done as a phased approach for a few years, “where they demonstrated things within the lab and then represented what it would look like on a vehicle,” Jedynak says. “It eventually evolved from being called ‘hardware/software convergence’ to ‘C4ISR/Electronic Warfare Modular Open Suite of Standards,’ and then to simply ‘CMOSS.’ It all started in 2013, and eight years later, things are really rolling forward.”

CMOSS is example of MOSA, which has become an imperative for all three armed services. On January 7, 2019, the DoD Service Acquisition Executives for the Army, Navy, and Air Force released a joint memo stating that MOSA-supporting standards should be included in all requirements, to the maximum extent possible.

“MOSA is a philosophy that says: ‘Thou shalt do it in accordance with an open approach.’ Standards like SOSA or Vehicle Integration for C4ISR/EW Interoperability (VICTORY) are instantiations to meet the need to use a modular open systems approach,” Jedynak explains. “MOSA is an approach and lots of standards fit within that umbrella.”

The Under Secretary of Defense “endorses MOSA as ‘an integrated business and technical strategy’ to achieve competitive and affordable acquisition and sustainment over the system life cycle,” Hutnan says. “In the development of DoD systems, MOSA is an acquisition and design strategy consisting of technical architectures, which adopts open standards and supports a modular, loosely coupled, and highly cohesive system structure.”

The Army’s answer to MOSA is CMOSS, which aims to consolidate warfighting capabilities. “CMOSS efforts are being led by the Program Executive Office for Command, Control, Communications-Tactical (PEOC3T),” Hutnan adds. “CMOSS is a MOSA that uses published standards – OpenVPX, MORA, VICTORY, Redhawk, etc. – as opposed to a vendor’s proprietary standards.”

The Air Force, for its part, created Open Mission Systems (OMS): “The OMS initiative leverages open standards such as SOA, UCI, and FACE – all for normalizing command and control mission information for avionics systems,” Hutnan points out.

To bring all DoD service approaches to MOSA together, and to couple it with the Defense Industrial Base (DIB), the DoD solicited industry to get consensus on an integrated technical architecture. “The result was the formation of the Sensor Open Systems Architecture (SOSA) Consortium, which is managed by The Open Group,” Hutnan says.

The SOSA Consortium helps “the government and the DIB to collaboratively develop open standards and best practices – enabling enhanced, accelerated development, and deployment of affordable, interoperable sensor platforms and systems,” he adds.

“The SOSA standard effort is somewhat similar,” Jedynak says. “I want to be careful because I don’t want to speak on behalf of other people, but the people leading CMOSS connected with people leading open architecture efforts for other services, like the Air Force, and shared their experiences and lessons learned and asked: Could there be some synergy? And that’s where the people who started CMOSS helped kickstart the SOSA activities and then ‘aligned strongly.’” (Figure 2.) 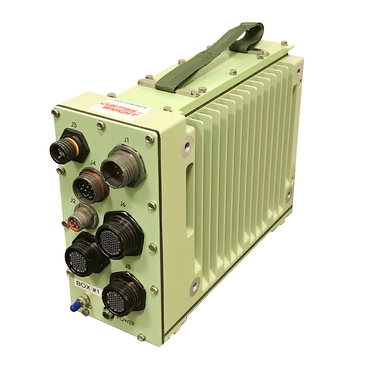 Not everything is a perfect fit across standards, but more commonality exists than ever before. Some portions of CMOSS “are nearly in direct alignment with SOSA and need very little modification to fit in,” says Borton. “In other areas, SOSA decided to take a different direction, and a system will need some ‘parallel play’ going on.”

SOSA adapts the best of many open architectures and standards. CMOSS is no ­different. “Plug-in card profiles were initially imported from CMOSS,” Borton says, and “the system management module was inspired by CMOSS concepts, and the front-end modules (emitter/collector and conditioner/receiver/exciter) use Modular Open Radio Frequency Architecture (MORA) as their communications technology binding.”

One important thing to keep in mind, Borton adds, is that while SOSA specifies components that can be together to make a sensor system, SOSA doesn’t specify the sensor system itself. “Those SOSA components, whether infrastructure or modular functionality, can reside side-by-side with non-SOSA components such as CMOSS,” he elaborates. “It’s up to the designer, with all of the factors they’re balancing, to determine how much SOSA (or CMOSS) a sensor system is comprised of.”

CMOSS appears to benefit everyone. “The government gets a stronger, healthier set of standards. And the industry gets more opportunities – essentially the pie is getting bigger,” Jedynak says. “There’s more alignment and it’s good for lots of players – including existing players within the VPX market, but also for smaller companies that want to provide a special technology to the battlefield without delivering an entire turnkey system. It opens up more opportunities for people to bring their solutions that fit into this building-block architecture. Instead of a winner-takes-all way of doing things, more people are involved because it’s more modular and an open standard.”

Demand for CMOSS started picking up in 2018 and since then, requirements for CMOSS have only increased, according to SRC.

CMOSS also affects embedded system designs. Backplane I/O composition “has the largest impact on embedded compute,” Borton says. “In the age of multichannel gigasample converters in one slot, getting the data in and out of the receivers/transmitter and the associated compute chains, and getting data in and out of plug-in cards, is fundamental.”

Each card has access to a typically full-star Ethernet link(s) to any other card within the chassis and more localized PCIe connectivity to several local card slots. “Depending on backplane configuration, the PCIe bandwidth may be greater than Ethernet can provide. This can greatly influence a system or card set design. Depending on which data movement path you take (and the sheer amount of potential receiver data) could drive a need to have enough compute in the slot to decimate the data down sufficiently before passing it on over one of those interfaces,” Borton notes.

In 2019, Abaco Systems decided to include SOSA/CMOSS alignment in its product roadmaps. “We now have a portfolio of 3U/6U VPX SOSA/CMOSS aligned offerings for single-board computers, graphics cards, digital signal processing, and networking,” he adds.