Military technology has long looked to the natural world for its cues, taking a page from a field called biomimetics, in which principles from chemistry, biology, and engineering are applied to human-fabricated materials, systems, or machines that function similarly to biological processes.

From simple military camouflage – used in a basic way in the mid-1700s by rifle-bearing armies – to the more recent U.S. Department of Defense (DoD) tests of robotic dog-like quadrupeds and insect-like small drones, biomimicry can often suggest a path for armies to send in a ringer when terrain or front-line circumstances are too dangerous. 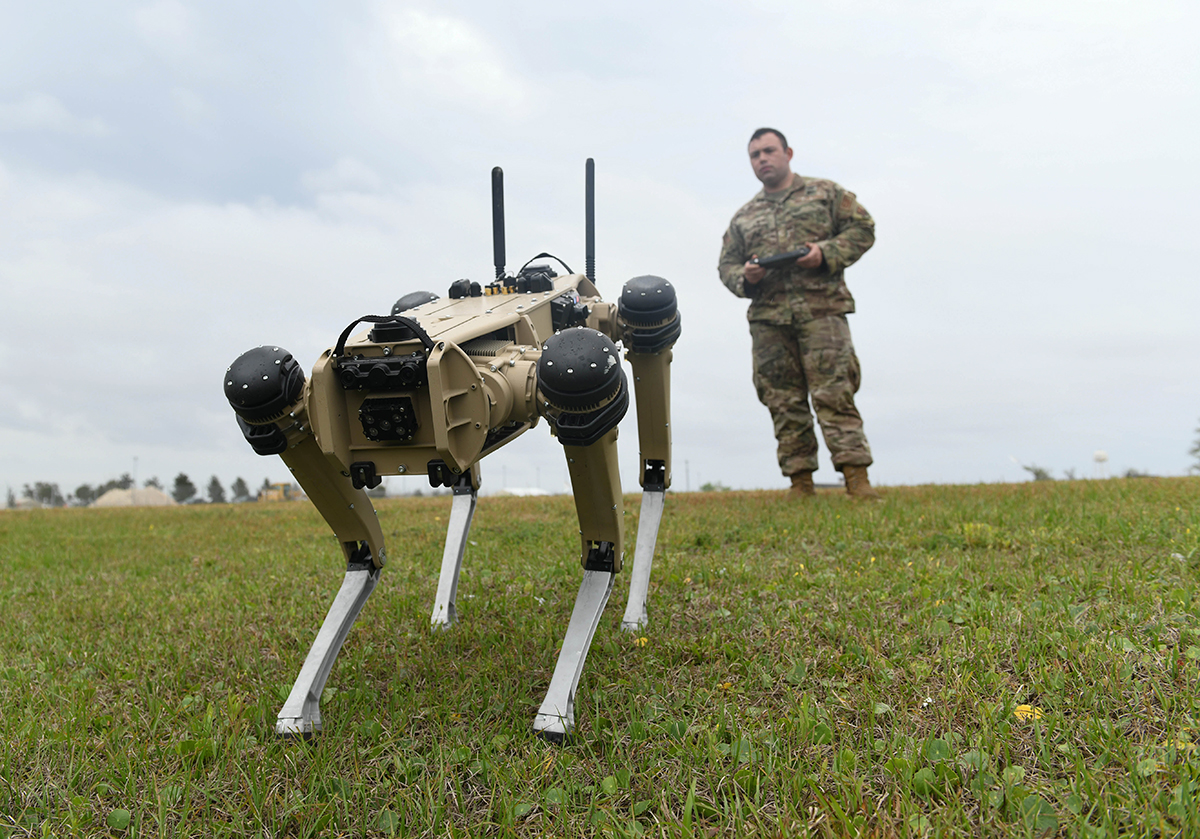 The purpose of the dog-like Quad-legged Unmanned Ground Vehicles (Q-UGVs) – added in early 2021 to the safety initiatives at Tyndall Air Force Base (AFB) in Florida – is to add an extra level of protection to the base, Air Force officials say. The robot dogs, designed by Ghost Robotics and Immersive Wisdom, are the first of their kind to be integrated onto a military installation. (Figure 1.)

“As a mobile sensor platform, the Q-UGVs will significantly increase situational awareness for defenders,” says Mark Shackley, Tyndall AFB Program Management Office security forces program manager. “They can patrol the remote areas of a base while defenders can continue to patrol and monitor other critical areas of an installation.”

Features on the robot dogs enable them to easily navigate difficult terrain, using 14 sensors to create 360-degree awareness, according to the Air Force. The Q-UGVs can operate in -40 °F to +131 °F conditions, are equipped with a crouch mode that lowers their center of gravity, and can switch into a high-step mode that improves leg mobility.

The U.S. Air Force also reports that it is now developing remote-controlled microdrones that borrow from the avian world. While bird-like drones or miniaturized unmanned aerial systems (UASs) are nothing new, what makes these under-test UASs unique is the way they flap their wings and change direction in the air, just like real birds.

The Air Force Research Laboratory (AFRL) recently announced that it is collaborating with California-based engineering firm Airion Health to develop a prototype of what it terms the micro air vehicle (MAV) that can mimic bird and insect flight. When complete, the drone will be capable of six degrees of flight (6DOF); that is, it will be able to move freely in three dimensions.

According to information released by the AFRL, its engineers have found a number of challenges exist when manipulating man-made mechanisms to perform instinctive movements of flying insects and birds created by nature. One such challenge is designing an aircraft capable of 6DOF flight with only two actuators. Actuators are components used in many kinds of devices that convert energy – whether it’s air, hydraulic, or electrical impulse – into mechanical or electromechanical movement. For actuators to work, they need both a control signal and a source of that energy.

The device would enable a biomimetic microrobotic aircraft to perform insect-like maneuvers with two physical actuators, while using minimal computer processing power. According to information from the AFRL, the wings of the device generate controllable forces based on position and velocity profiles, resulting in time-varying wing upstrokes and downstrokes, which at times may be asymmetrical.

The continuous process of updating the position and velocity, taken together with remotely controlled directions from a human user, will enable flapping-wing MAVs to achieve the desired 6DOF flight dynamics, Air Force officials say.

The AFRL states that practical applications after successful implementation of the invention include, but are not limited to, in-the-open surveillance, aerial swarm operations, and battlefield situational awareness. Tiny unmanned systems with this kind of range would be able to maneuver into very small or tight spaces, such as tunnels, or be sent into larger spaces, like pieces of machinery, for remote inspection in spots where humans would not fit.

Specifics such as the weight and size of the MAV are yet to be disclosed. The non-exclusive Patent License Agreement (PLA) signed between the AFRL and Airion Health dictates that a workable prototype will be produced within 15 months.

Joshua Laravie, the Technology Transfer Specialist and Domestic Alliance Program Manager for AFRL’s Aerospace Systems Directorate, said in an announcement about the AFRL/Airion Health agreement: “We were excited to license our technology to a small business that was building strategic relationships in the drone industry. “[We] are looking forward to supporting their efforts to commercialize an [Air Force] technology.”