The Power Scavenger battery charge management concept from Lincad is designed to meet the mobile tactical battery charging requirements of warfighters in the field. 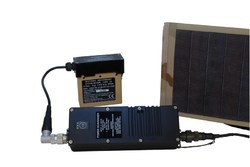 The Power Scavenger battery charge management concept from Lincad is designed to meet the mobile tactical battery charging requirements of warfighters in the field. It weighs weighs less than 750 g and measures 275 mm x 75 mm x 60 mm. Originally configured as a solar charge management device, it was been expanded to enable polarity independent connection to any DC source. It can recharge Lincad’s Lithium Ion Power System (LIPS) suite of batteries from any DC source from 11 V to 50 V, which is achieved through integral latching and power connection terminals. Recharge of other in-service batteries, such as the BB250, is possible via configurable battery interface adapters (BIA); third party batteries can also be recharged from a fully charged LIPS battery if alternative power sources are unavailable.

In addition, active thermal management is engaged to maintain optimal function even in severe environments. The Power Scavenger also features a USB A connector for recharging other mobile devices and can be configured to emulate a current- and voltage-limited DC power supply for user-specific requirements. An adaptable communications interface for protocols such as DQ and SM Bus have also been incorporated into the design of the Power Scavenger.